Sadly, I know a thing or two about having a hangover.  I spent last night in Portland, Oregon (update to come) but, luckily for you guys, I prepared my go-to hangover kit staples for all you lush ladies and hopefully, it helps you recover before going back to work tomorrow. UGH.

1. Fiji Water: Really, any water (or coconut water) will do but there’s something about Fiji water that makes me just feel fancy.

2. Kate Somerville Cyto Cell Dark Circle Corrective Eye Cream: As we get older, the dark circles will COME.  It’s sad but true. You can dab a little of this stuff under your eyes when you wake up, to help hide the dark circles and puffiness.

3. Q-tips: These are a must for getting the runny eyeliner and mascara off your face.

4. Chloe Black Oversized Round Frame Sunglasses: For if/when you actually have to go outside and face the world.

5. MAC Cosmetics Studio Stick Concealer: Even though it’s discontinued, GASP, this MAC concealer is pretty close to my cult favorite.  You need it to conceal any acne blemishes or redness around the nose (always, for me).  It’s small and goes on smooth like silk.  LOVE.

6. LUNA Bar: I’m not a huge fan of protein bars but LUNA does make some good flavors. When you’re desparate and hungover, they’re totally helpful until you can get your hands on some french fries.

7. Colgate Wisps: These are perfect for a quick, faux brushing of the teeth.

8. Aspirin:  I don’t even really need to explain this one, right?

9. Altoids Smalls: I love the smaller version of these and they’re perfect for fitting into a small clutch!

I try not to play product favorites but I have to admit, my skin has been in pretttty good shape lately.  And this means: only minor breakouts, no dry patches, not a ton of redness and hyperpigmentation…so I, naturally, had to share what I’ve been religiously using.  I’ve already blogged about most of these products but hey, here’s a roundup, in one place, so you can see everything that I’m currently using and loving:

Shiseido Urban Environment Oil-Free SPF 42: SPF, SPF, SPF.  Wear it every day, all day.  I’m a big Shiseido SPF girl because their sunblock formulas tend to be on the lighter side and don’t make you feel greasy and gross.

Darphin Aromatic Cleansing Balm with Rosewood: I told Darphin’s PR rep that I had dry, sensitive skin and she reassured me that I would LOVE this cleansing balm.  In fact, I believe she may have used the phrase “heaven on your face,” and yes, she was correct.  If you don’t like skincare that has fragrance, this might not be for you but I love how luxurious this cleanser feels and it doesn’t dry out my skin.

Kate Somerville DermalQuench Liquid Lift Advanced Wrinkle Treatment: I’ve had my fair share of Kate Somerville treatments so any time they say they’ve captured a portion of one of their amazing (and costly) treatments in a bottle, I’m sold.  I’m into the cool burst of moisture and I like that I feel very high-tech when spraying it on my face (3 lines on each cheek and one on the forehead).  YES, ma’am.

Freeze 24/7 Ice Cream Double Scoop Intensive Anti-Aging Moisturizer: Aside from the fact that this product has “ice cream” in its name, it really is a fantastic anti-aging moisturizer…and, believe me, I’m picky about my moisturizers.

Kiehl’s Rosa Arctica Eye Cream: I’m clearly a big Rosa Arctica advocate but the eye cream is also pretty fantastic.  They say moisture is pretty much the most important thing to prevent wrinkles and fine lines and this eye cream has it.

Kate Somerville Neck Tissue Repair Cream with Peptide K8: I’ve blogged before on my fear of my impending turkey neck and, because of this, I’ve been AVID about using neck products.  It’s a little too early to say that I’ve seen “improvements” (since I’m only 29) but I have good faith that this product will work because it’s Kate-endorsed.

Reed Krakoff Gym Bag: Granted, this is probably the fanciest gym bag EVER but I’m in love with it and clearly, wouldn’t actually use it at the gym.

Jouer Everyday Classic Wear Mascara: I’m a big fan of Jouer so obvisouly, this mascara didn’t let me down. It’s my favorite deep, dark black and it doesn’t flake!  Perfection.

Suave Keratin Infusion Dry Shampoo: I’m an avid dry shampoo user and I love that this particular dry shampoo is keratin-infused, adding even extra benefits for the hair.

A friend and I are heading out to the desert tomorrow morning at, gasp, .  There are very few things that could actually get me to wake up before 11 on a Saturday but hey, Memorial Day in is calling me.

J. Crew bikini top and bottom: I love a red bikini or, really, a red anything.  This one is simple and the strings make this particular style look good on almost every body type.

Dorothy Perkins Black Aztec Crossover Dress: First off, I love the pattern.  Second, this dress is the perfect minimalist vacay dress (and can also serve as a cover up!) that can take you right from daytime to night.

Forever21 Classic Straw Fedora: A hat is a MUST when I’m outside in the sun for a long period of time.  Not only does it keep me cool but it also prevents sun damage on my face and scalp.

House of Harlow 1960 Robyn Sunglasses: I love pretty much everything HOH1960 but these frames are just really f-u-n and chic.

Sam Edelman Gigi Sandals: I have these in neon too.  They’re super comfy, simple and look good with almost everything.

Shiseido Sun Protection Lip Treatment SPF 36 PA+++: Lips are often neglected but if you’ve ever had sunburn on your lip, you know to always apply lip balm with SPF.  I can speak from experience, guys.

Redken Color Extend Sun Solar Screen SPF 12: Blonde hair can fade and oxidize fast when in the sun for too long so it’s VIP that I apply a spray with SPF protection and, as a bonus, the SPF also protects your scalp.

Kate Somerville SPF 55 Serum Tinted Sunscreen: It’s very inaprop to wear a full face of foundation at the pool or beach but yeah, with my rosacea and hyperpigmentation, I never go full on bare faced.  This face serum is the perfect solution to my problem since it not only has SPF 55 but it’s a serum (e.g. lightweight) and it’s tinted so it actually hides most of my imperfections. 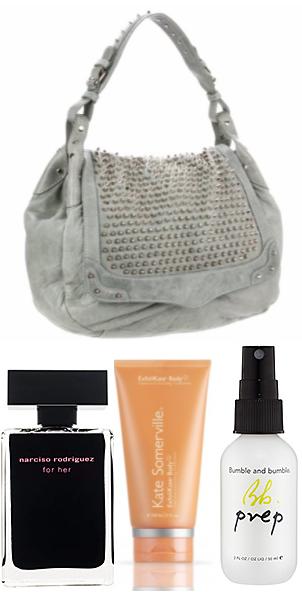 I haven’t done One Bag & Three Beauty Obsessions in awhile, BUT it’s back.

Truth be told, my neck has always been a one of those body parts that I loathe.  I blame my Nana because really, she started this shit.  She had the “turkey neck” and so did my Aunts (my dad’s older sisters- he’s the youngest of 5) and now, my 65 year old father even has it, what I also refer to as, “the curse.”  It’s one of those weird Wasp problems, I know, (and I’m so not a Wasp) but I notice it in EVERY PHOTOGRAPH of myself.  We all have these insecurities so don’t judge, k?  I’ve basically just learned how to LOOK DOWN in photos (see photo above)…

I am 100% honest when I admit that living in Los Angeles has absolutely given me a body compex that I never had while growing up in New York…and, while it’s upsetting, it’s hard to stop.  I have a very close family member that struggles with a severe eating disorder and listening to her/trying to understand her while growing up was one of the most painful things I’ve ever had to experience.  Someone who hasn’t been close to someone with an eating disorder can’t even fathom what it’s like; as an FYI, it’s NOT about the weight…it’s about the control and, as a bonafide control freak, I can attest to the fact that letting go ain’t easy.  While I’ve never technically had an eating disorder, being “body obsessed” has taken a toll on me that I’ve been trying to deal with and thankfully, I’ve manage to remind myself on the daily that I will never look like a runway model OR a size 2 celebrity but I CAN be healthy and fit.  With that said, of course, I still have my insecurities – my stomach, my knees (weird, I know) and my chin.  After I saw this story on Allure.com, I was honestly surprised to read that there’s a 71% increase in “chinplants” since last year.  And guys, I’ve always wanted a real chin, so no judgement…I’m just surprised that the motive behind the surgery increase is the fact that “people subconsciously associate a stronger chin with more authority, self-confidence and trustworthiness,” accoring to the Allure.com story.  My take on plastic surgery is: if it will make you feel better, go for it…but it’s NOT a band-aid (I can speak from experience).

While I  admit that I will probably end up getting a nip and neck tuck (hi, I’m vain), for now, I’m just using over-the-counter preventative measures: Kate Somerville Neck Tissue Repair with K8.  I’ve been using this for awhile, which proves absolutely nothing at age 29, BUT I believe in everything that IS Kate Somerville so when I’m 55 and don’t see the signs of “the curse,” I will send Kate a very personal thank you note (before calling the chief of surgery at St. Vincent’s).

photo: me looking DOWN.

When you live in Los Angeles, it’s really hard not to catch Emmy fever.  Even though I’m not actually attending the Emmys this year (or last year, or the year before that), I still use this “Emmy week” as a reminder that hey, I really need a facial to get my skin “red carpet-ready,” even if the red carpet is really just my tan carpet that resides inside my apartment.

On Thursday night, I was treated to the signature Kate facial at LA’s infamous Kate Somerville Clinic in West Hollywood in honor of the award show and ugh, yeah…boy did I need it.  First, let me say I’m in love with the signature facial – it starts off with enzymatic exfoliation and extractions followed by a customized treatment mask.  I, my friends, had way more extractions that I normally do which did not make this girl happy one bit!  But, on the bright side my dry, sensitive skin does really well with Kate’s products (as you can read here) and when I left I was super excited to receive a few of the newer products including the True Lash Lash Enhancing Eye Makeup Remover so stay tuned for a review on that soon.

OLDER POSTS
Back to the top